Rīgas Satiksme announces that hydrogen range-extended trolleybuses, deployed as part of the H2Nodes project, are carrying passengers on route No. 4.

The first hydrogen refuelling station in the Baltics was launched as part of the European Trial H2Nodes early in March at Vienības gatve 6 in Riga. 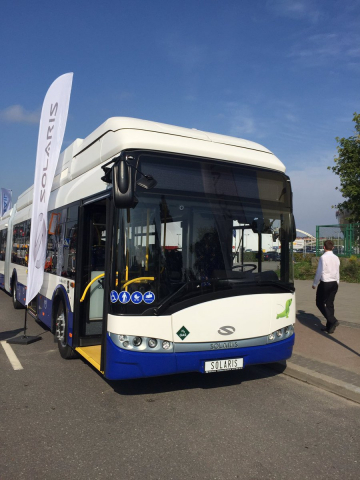 Rīgas Satiksme Board member Jānis Golubevs stated: “In mid-February this year representatives of Nel Hydrogen arrived from Denmark to fulfil the last equipment adjustment works. Now the station is working in test mode, which includes the filling of trolleybuses with hydrogen and the transportation of passengers, using hydrogen engines. The first results of the test are successful, and we can see that all the equipment is working. Yet we want to be 100% sure that everything works flawlessly and will repeat the tests. We hope that the process will be successful and the station will be fully operational in the coming months. It is important that we have met all the deadlines set for the project implementation and the company is supported by the European Union.”

As part of H2Nodes, Rīgas Satiksme has received 10 hydrogen range-extended trolleybuses. They can drive up to 150 km on hydrogen fuel cells, and trolleybus refuelling takes up to 10 minutes.

The European Union co-funds 50% of the total project costs for Rīgas Satiksme, which are estimated at EUR 16.1 million. The funding is provided by the Connecting Europe Facility (CEF), which is an integrated instrument for investing in EU infrastructure priorities in transport, energy and telecommunications sectors.